{Sesriem Canyon}: Aka the Day I Almost Melted

As most of you know,
Jurg and I toured through Namibia for a month during this past December and January.
If you're new around these parts, you can catch up here. 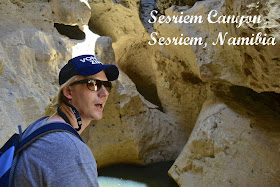 One afternoon during our stay at Namib Desert Lodge, Jurg and I spontaneously decided to hop in the bakkie {truck} and head the 60 or so kilometres out to Sesriem Canyon.  We had heard so many lovely things about it from Jurgen's family while staying on the farm and his Aunt had shown us photos of the canyon littered with pools of water and people relaxing in their bathing suits.  Baking in the heat of the summer Namibian sun, around lunch time Jurg and I decided that these cool water pools sounded like a pretty spectacular idea.  It's a canyon we thought, there would be plenty of shade right?

Our first warning should have come from the bemused look on the receptionist's face when we asked for  directions.  "You want to go to Sesriem Canyon right now?!  In the middle of the afternoon?  Most people go in the early hours of the morning."  Not understanding her concern, we bought a tube of sunscreen and headed back to the room to grab our tekkies {trainers}, backpacks, and water.

Thinking we were just going on a casual stroll, I wore my jeans.  Mistake #1.  On the way I also realized that I had forgotten my tekkies {I thought Jurgen had grabbed them and he thought I had grabbed them}, but decided I would be fine in my sandals. Mistake #2.  We thought one bottle of water would cover the two of us and we didn't take any food.  Mistake #3.

Shortly after arriving, I realized that we had probably made a bad decision.  The canyon was completely deserted of all signs of life and the few tourists we did see in the parking area were getting out of their car, walking to the ridge, taking a photo, and driving away.  But of course, down into the canyon we went {with me sliding the whole way in my sandals}.  At first we didn't see any water, but finally we turned a corner {hopping from shade patch to shade patch}, crawled over a few boulders, and found one teeny tiny pool just out of reach in the corner.  We headed in the other direction for a couple of excruciating miles and kept telling ourselves that the rest of the water must be 'just around the corner'.  By this stage I was almost in tears because the sand was so unbelievably hot and it kept sliding under my feet when I walked.  And the jeans I had worn for our "casual" stroll, they were now plastered to my legs in the blistering heat.  And there was no more shade.  And we were completely out of water.  Bad move for team Jurg and Jen.

At one stage Jurgen actually, seriously recommended that we attempt to climb out of the canyon and walk up top along the ridge back towards the car.  But to his great dismay, I was not willing to attempt to scale a canyon wall.  No way José.  The truth was that there was no water... because it was the peak of summer in the middle of one of the driest deserts in the world.  Needless to say, it was a long, slow, life-draining trek back to the car.  As we were climbing out of the canyon I could actually feel my limbs going numb.  A/C has never felt so good.

Later that evening we found out it had been a high of 49 degrees that day... 120 degrees Fahrenheit.

By far the hottest temperatures I've ever experienced. 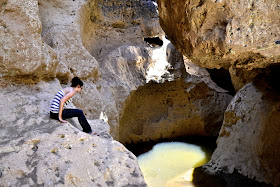 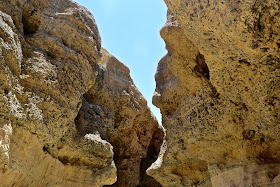 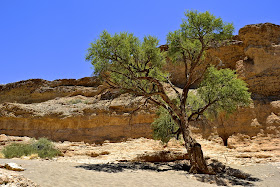 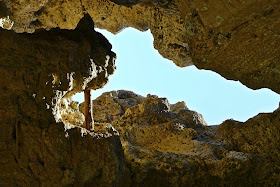 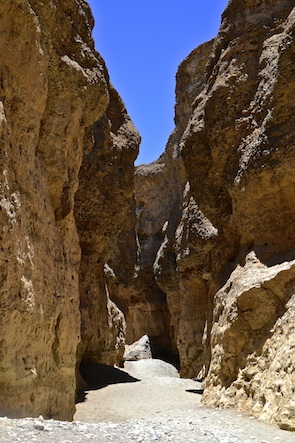 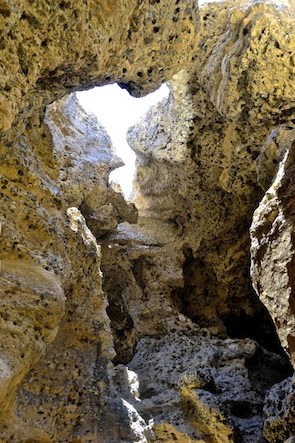 There is a moral to this story.

1) Namibian summers are extremely hot, particularly in Sesriem and Sossusvlei {two of the driest areas on the planet}.  If you find yourself in Sossusvlei over summer, schedule all your activities for the very early hours of the morning {think sunrise} and spend the afternoons lounging next to the pool with a good book and an ice-cold drink.

2) Dress appropriately.  I thought sandals wouldn't be a big deal.  They were.

3) Enquire beforehand.  We just assumed that the canyon would have water in it all year long and it definitely didn't.  Ask at reception and speak to other visitors who have visited wherever it is you are going.  And when the concierge looks at you with eyes full of a combination of confusion and pity, take a cue.

Thanks for the love!